Posted on May 1, 2019 by Whosoever Gospel Mission 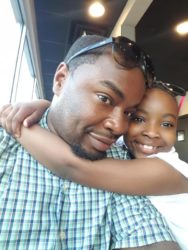 Hantz with his daughter, Teeyah

I can do all things through Christ who gives me strength. Philippians 4:13

Hantz came to the Whosoever Gospel Mission on March 28, 2018 with a bandage on his right arm and apprehension in his heart. At his lowest point, he found himself homeless, malnourished, and addicted. The last time he was in Germantown, he was using drugs. Now, he was coming to enter the New Life Program.

Not long before, Hantz was in the hospital waking up from a coma. He had to relearn to walk while nursing a serious addiction-related wound that nearly cost him his arm. Hantz knew that the Lord had spared his life and his limbs. He also knew that he needed Jesus.

When Hantz came to the Mission, his heart was ready for the good news of the Gospel – that in Christ there is forgiveness and hope, there’s a way forward out of the shame. He soaked up the messages in chapel and began to grow in confidence and a sense of purpose. He realized the Lord had placed two big tasks in front of him – pursuing his career and reconnecting with his family. 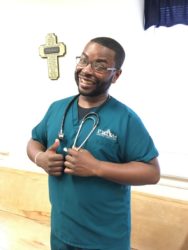 Hantz in his school uniform

While in the hospital, Hantz was deeply touched by the kindness of two particular people – a CNA named Derrick and an RN named Nicole. When they cared for him, they made him feel human. Their small acts of kindness – a word of encouragement, a gentle tone of voice, a smile – had a huge impact. Hantz was ready to give up and die. But they gave him a reason to want to press on. He saw the difference kindness makes and thought to himself, “I have the power to do that.”

Currently, Hantz is addiction-free and enrolled in the Prism Career Institute to become a Licensed Practical Nurse – his first step toward becoming an RN. He plans to stay at the Mission until he graduates from school and launches into his nursing career. He loves serving others and spreading kindness and joy. As for reuniting with family, they’ve welcomed him with open arms. Nothing has brought Hantz more joy than spending time with his 8-year-old daughter, Teeyah – she’s the apple of his eye. 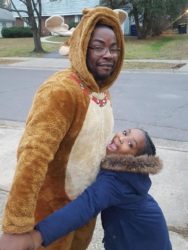 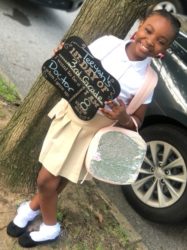 Hantz thanks the Lord for using the Mission to remind him of his capabilities and show him how, in Christ, God always provides for and never forsakes His children. He’s grateful for a second chance at life.

This entry was posted in Real Stories. Bookmark the permalink.